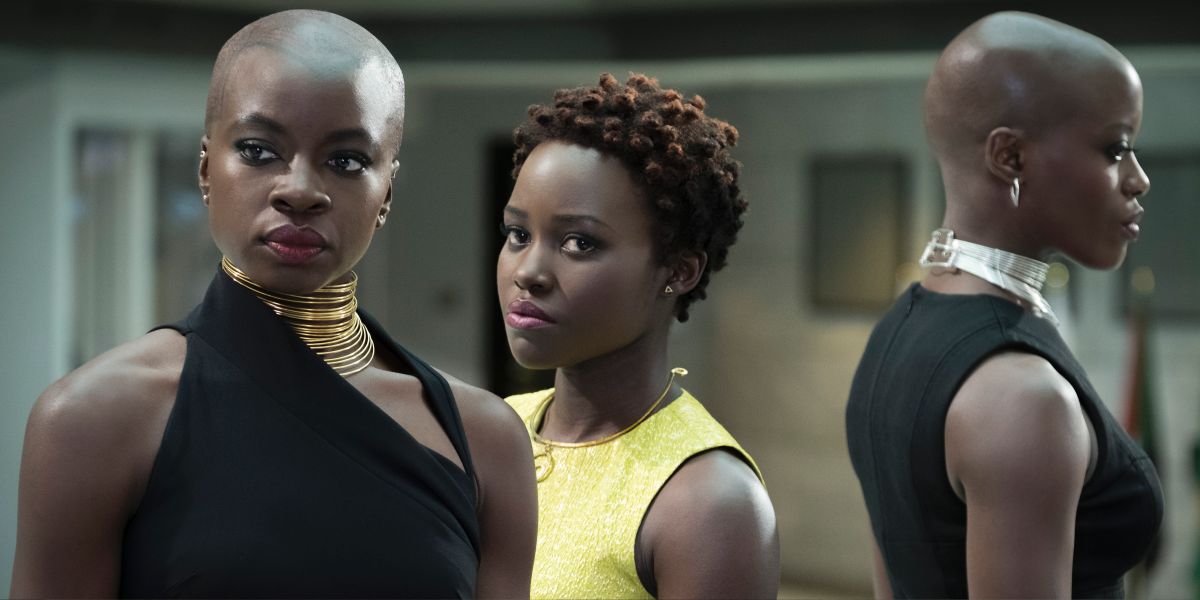 Most of y’all already saw this, so I don’t know what you want me to tell you. You clearly enjoyed yourselves. I saw the pictures. That flash dance line was pretty slick. The outfits, my god, the outfits. Did you see the pics from the South African premiere? Pretty sick.

So, yeah. I mean, you saw it. Everybody reading this saw it. Numbers don’t lie. What do you want me to say? Are you taking a survey? Fine:

A) I am an African-American movie-going customer between the ages of 18 and None of Your Business.

No? Looking for a qualitative statement, even though you were standing in the back of the same theater I was, just with a clipboard? Fine:

That casino scene was really cool.

(Scratches chin, admittedly not in thought.)

When Okoye jumps off that balcony I pretty much settled in for the rest of the film, satisfied I was in good hands. That was some Crouching Tiger jam right there.

Rarely have I felt so physically self-conscious after a film. Everyone in most Hollywood fare is beautiful, a qualifier for casting so ubiquitous it’s boring. At the same time, you rarely see more than one black person at a time in a Hollywood film, so to see several of them grouped together being graceful and intellectually stimulating and not dancing was a bit overwhelming. Everyone in this film is so beautiful I could feel the tub of popcorn slip from my hand and spill its popped guts onto the floor, never flinching to stop it, my mouth agape. I went out and bought a Fitbit, sensing my body for the flotsam of my life it had suddenly become.

(Checks Fitbit, notices you get no steps for typing.)
(Shuffles feet for a few seconds, checks Fitbit. Curses.)

There is a natural penchant to be attracted to people in the midst of physical activity (their activity, not yours, though one could make a stalker’s case for the aerobic benefits of voyeurism if one were inclined and a criminal), so I’m not writing that off, but what I’m really driving at is…well, it’s more like I’m circling it. Forgive me, since as observations go, it is crass: Has Lupita had that ass the whole time? Because I was definitely on notice during Black Panther. Considering all three of her previous onscreen roles, I think a little surprise is understandable: No one was looking for ass in a slave film, and no one should be looking for ass in a Disney tale about a widow raising a chess prodigy. In the third, even though I saw her in the trailer for the Liam Neeson haymaker Nonstop as a flight attendant, I skipped it because she only appears in it 4 times for a whopping total of 2 seconds with no speaking parts, which suggested to me back when I first saw it that she might not be much of a player in that wacky action misadventure. Of the 43 photos on the IMDB page for the movie, Lupita appears in one, and it’s a headshot.

Sure, I know I could go back through a bunch of red carpet pictures and get a real answer, but I don’t do red carpet searches for ass. That’s creepy, even in the name of science. I like being able to hold my head aloft and sniff, “If I have not witnessed the derriere in the fair playing fields of a cinematic affair, then it is a statistic hardly worth noticing. Good day, sir.”

(Listens to heater kick on, wonders how long it will take to experience actual heat from current distance to vent. Wonders if Lupita can hear her heater in her house, then realizes she probably lives in Los Angeles and that the air is her heater.)
(Snaps fingers, recalling he just saw an interview in which she mentions she lives in New York.)
(Puts heater debate back on deck.)

Black Panther strikes me as a very hip hop-influenced film, not in its vibe or trappings – there is very little of that presented directly beyond Killmonger’s aesthetic – but in how it bores into the zeitgeist by simply being what it is. Hip hop is the most powerful and affecting musical form to emerge in the last 30 years, and may be the most influential art form during that same time period. Black Panther sits clearly in the same light. It comes out of the gate thoroughly packaged in a way that captures audience over multiple points of interest that took hip hop years to accomplish: language, fashion, music, politics. Consuming all, processing all, affecting all.

I won’t go so far as to say that the film is fashioned in the same way as hip hop. Hip hop took what it was left with and made something new. Black Panther took something old and racist and made it unapologetically black and diasporic. It has taken craft notes from hip hop, and conversely has its power. For Black Panther, hip hop is a leaf on the Heart-Shaped Herb the filmmakers have consumed. So while not being hip hop, Black Panther operates in a very similar political fashion. The difference is that it doesn’t have to wait years after its inception to begin changing the world around it. Hip hop very much paved the way for a film like this, despite the film seeming to reflect very little of this influence on its surface. And good for it. In many ways, Black Panther represents a place for hip hop adherents to consider moving toward, or better, keeping in line with its primary engine and incorporating its lessons, the teacher learning from the student.

(Looks at clock. Notes rising of sun. Many curses.)

INT. GAME SHOW  STUDIO – DAY
Two men – one in a dashiki, the other in a puffy winter coat – sit across from each other on a game show set, a pyramid of phrases lit by theater lights. A clock is ticking loudly in the studio, and every box has been revealed save one.

I don’t know what you want me to say. You already saw it, or you’re going to. Even the ankh-right cats on YouTube have seen it, regardless of their protestations. Even its haters have seen it, if only to better hate, making arguments for independence they conveniently whip out when it’s their turf being praised and supported. I’m not wasting any time on people who actively have no interest in seeing Black Panther, let alone people pulling out soapboxes to make a case against seeing it. I got no time for that kind of joy deficit, especially when most of these people are the same people who said we should all go see that artistic and soul-vapid bomb Birth of a Nation a year and a half ago.

Really, everyone needs to pace themselves here. Black Panther isn’t any one thing, isn’t about any one thing, and anybody who tries to boil its messages down to one thing is someone you should stop engaging on the topic of Black Panther films, and perhaps life. We’ll be talking about and referencing this movie for years. It has committed an act of cultural sea change. You will be able to gauge your friends and foes by their measure of the film (or lack thereof). It is a film we have been building up to not only in theaters, but as a society. A time will come – very soon – when being the person who hasn’t seen Black Panther will put you in the same company as the person who still hasn’t watched The Wire or listened to Purple Rain. Don’t be that guy.