Nine times out of ten, saying someone is playing a “race card” is just plain lazy.

When someone says you’re playing a race card they’re often really saying “I’m incapable of or have no desire to talk about racism on the level at which you are introducing it into this discussion.” When you say it like that it almost sounds reasonable. If we were having a debate about which of us makes the best pumpkin pie, and in the midst of my defense I respond with “Well, I’d be better at making pumpkin pies if I wasn’t having PTSD flashbacks to cotton fields every time I went out to pick a locally grown gourd!!!”, that’s understandable. That’s laziness, insanity or me trying not to lose face. On the other hand, if we’re talking about social ills or history or politics or culture, the rising specter of race should almost be expected. I’m suspicious of any conversation longer than five minutes about stuff like that that doesn’t bring it up.

At the same time, this is a tactic in race conversations that I’m starting to feel all “nigger with an -a” about (meaning it’s coming close to becoming a lost cause). So, like most exasperating things about race conversations, I fight the comical with the comical. To wit: here are some really awesome race cards that you can slap down on the table Spades-style the next time someone says you’re playing a race card.

The Race Business Card
Because racism is all business, baby.

The Race Playing Card
This deck has 53 cards: the typical 52 plus an extra Kanye joker which is always wild. 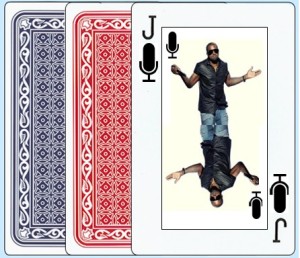 The Race Membership Card
Not to be confused with a Ghetto Pass (which only comes in black), this card is also available in Grill Gold.

The Race Bingo Card
Please note: The free space in the middle isn’t all that free.

The Race Postcard
Aloha from Angola!

The Credit to Your Race Card
Don’t get Stop-and-Frisked without it.

The Race Birthday Card
For that special friend you secretly share all your racial jokes with.

The Race Memory Card
Just in case anyone forgets.

One thought on “Race Cards For Every Occasion”