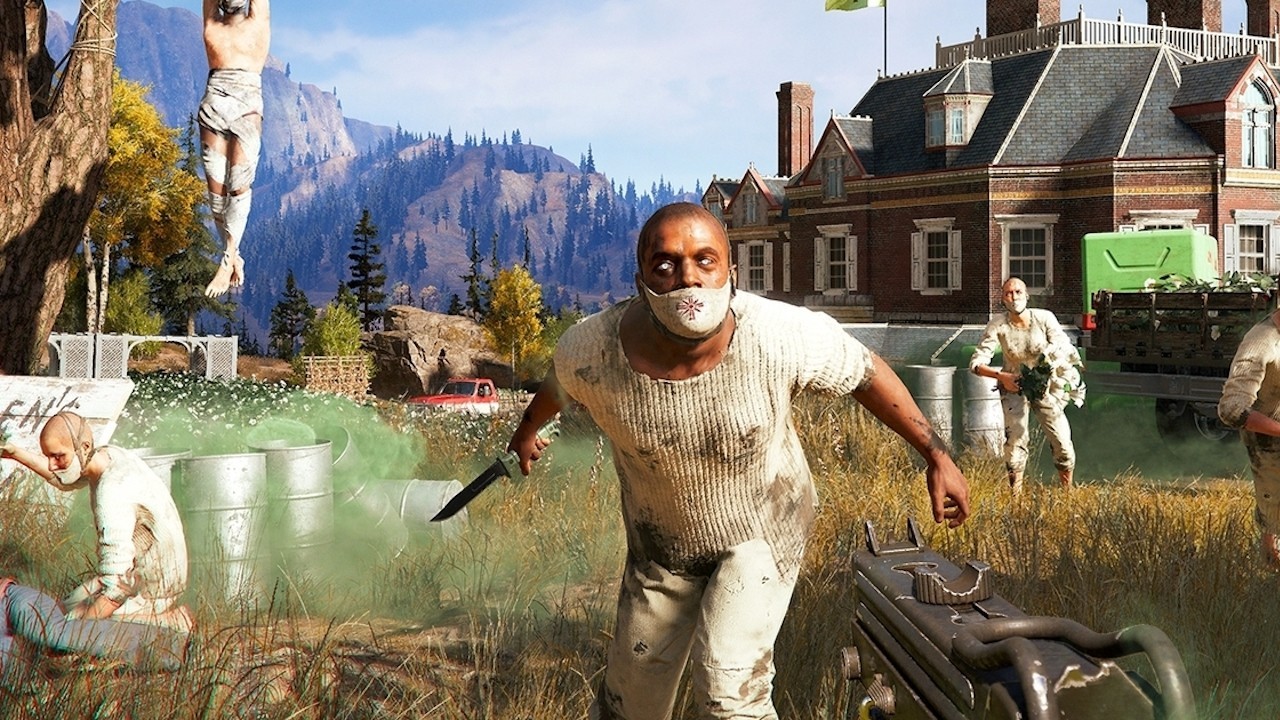 Things this does not mean: I finished the campaign. I completed all missions. I gathered all collectible content. I followed the story to its conclusion. I collected even half of the trophies. It doesn’t mean any of those things. It simply means I’m done playing it. I’ve mentioned elsewhere that I’ve been struggling with this video game, and it isn’t due to a sloppy aiming mechanism (which it suffers from) or a bland and repetitive mission tree (which also mars the gaming experience). Even when my character was kidnapped and bound by the game’s villainous cult for a ludicrous fourth time while not being immediately disposed of, I stuck it out.

Ultimately, I stopped playing because the game was making me hate myself.

For starters, Far Cry 5 is the embodiment of everything wrong with diversity as it is understood and practiced in this country: a world populated with people of all colors, but whose politics roughly fall under either “psychotic drug-fueled apocalyptic cultism” or “Trump supporter”. It is a perfect distillation of diversity as obtuse white people understand it: anybody can be American so long as we all ultimately believe what white people believe. There is color – lots of color, so much color – but no ethnicity, no distinct non-white culture. In the end the game asks you to preserve a society in which no one sees color, which misses the point of what we used to call diversity before company workshops ruined it, so we now refer to the whole exercise loosely as “representation”, which is marginally better by about .3% last time I checked. When we asked the video game industry for more people of color in video games, we didn’t mean “add an afro selection” to the character generator’s hairstyle pinwheel. Some games get this, but this isn’t one of them, despite its many trappings of color.

Speaking of colored people, the population ratio in this game is so out of whack as to be distracting. The game takes place in the fictional Hope County, staked in the vast state of Montana. While gunning their way through its hills and backroads, players encounter black and brown people at almost every turn, and on both sides of the battle. Almost immediately I found these interactions odd. Montana is the fourth largest state in America; only Alaska, Texas and California are bigger. Despite its vast perimeter, there are only 1 million people living in Montana. Of that, only 0.6% of those people are black…barely half of a percent. That’s only 60,000 black people spread out over a state that’s 147,000 square miles from head to toe. 60,000 people wouldn’t sell out a Beyonce concert. You could fit every black person in Montana in Ohio State’s Horseshoe stadium and it would still be half empty. Unsurprisingly, there are more indigenous people in Montana than there are black people – ten to one, in fact – but Far Cry 5 isn’t overrun with Cheyenne characters. By contrast, I saw a black character every five feet. I shouldn’t have seen a black person in this game at all, and if I did, I should have seen maybe two and they better have been cousins. None of this would seem like something to complain about, but then I was never looking for randomly generated blackness in a video game based in the rural mountain region of a Plains state. I play these things to escape reality, not to integrate my video game experience with ham-fisted throwaways from a diversity workshop. It is evidence that you can do the right thing for the wrong reason and defeat the whole purpose of doing the right thing. But just on a surface level, the population math of this game kept kicking me out every five minutes when I saw a black person where I knew in my mind one should not be. I get that it’s not reality, but for a game that spent countless hours in development nailing down an engine to make realistic fishing a viable in-game activity, it was a little much to swallow.

This myopic soapboxing extends into the main character that players control. You can choose the gender and color (not ethnicity or culture, but color) of your character, who as it turns out is a rookie deputy. If you’ve made it this far I hardly feel the need to dig too deeply into the cognitive dissonance whiplashing me at every moment from playing a cop out to protect an entire county of Joe the Plumber red staters while being black in a real world where real white people are calling real cops on real black people for using AirBnb and sleeping in their dorms. I fought the urge daily to scream at the news the phrase, “Don’t you people know I’m trying to save you in Montana?!” but that would probably only get me interrogated for holding a Playstation controller too aggressively.

There is a narrative side story where players uncover that the cult has been attempting to influence citizens by way of putting their homemade drug “Bliss” into the local water source. That was a little too Flint, Michigan for me, but since there was a mission that I could play to put an end to some aspect of it, I rolled with it. It was a luxury I possessed, seeing as how I did not live in a city where state-sanctioned negligence is actively damaging its citizens and no one is being charged with a crime. It was not, however, so luxurious a position that I did not consider it. It was another aspect of the game too close to home for me.

All in all, I couldn’t deal with playing what was essentially a game whose goal was to make America great again. It is a game executed very well at capturing a thing I have no desire to do, which is saying a lot because I find no small pleasure in blowing up digitized bad people and collecting trophies. But as a second degree afro-pessimist, there was little to no pleasure in a game in which all of the characters – including mine – basically fall within what is essentially a Republican spectrum. I don’t mind losing a game, but there is nothing to be gleaned on even the level of entertainment from a game that, even when you win, you don’t.

One thought on “A black review of Far Cry 5, the “Make America Great Again” of video games”