Contrary to public outcry, X-Men: Apocalypse isn’t the worst superhero film in just the last three months, let alone its own tedious franchise, but for every one thing it gets right it gets a dozen other things wrong. When you start running that math out for two-plus hours, you’re left with a film destined to implode.

This is a sixteen year old franchise, and it feels like it. I don’t know what Bryan Singer is doing next but this movie makes me not care. I just want him to get some sleep or do some light beach reading because this film is the work of a worn-out imagination.

Ten things this film drops the ball on, in no order because they all equally suck.

One thing this movie gets right (or at least close enough) are its ancient Egyptians; not a white one among them. Halle-freaking-lujah. See, Hollywood? It CAN be done. What I was left wondering was why a pyramid was ever designed that could trap Apocalypse. Why would he ever allow such a thing? We’re talking a lot of overtime to put in these traps. I have to believe at some point Apocalypse looked at the plans and thought, “Yeah, this is cool, but lose the collapsible chutes and ladders leading to my bedroom, stat.”

I get that the motto in Hollywood is “bigger is better” but come on. How many times are we going to DESTROY ALL HUMANITY as a plot? The X-Men have been around for over fifty years. Not every story led in with a villain trying to destroy the planet. And trust me: Apocalypse is a big time villain. When you tap him in, that better be the end of your franchise. (Here’s hoping.)

Can we get past Magneto as a villain? You know they have other villains, right? Even when they introduce new villains, they bring Magneto back. Hell, they’ve been using a nemesis as a member of their team for at least three movies now, and I’m on serious Jennifer Lawrence burn-out as it is. I promise we’d have all gone to see the Hellfire Club (X-Men: First Class) without Magneto and I’d be pleasantly surprised to see him back in the mix now instead of rolling my eyes at another one of his tete-a-tetes with Xavier about how humans no likey mutants.

It really doesn’t matter who you cast in this role since you know going in they’re going to be buried under make-up, special effects and fanboy gaze. This movie proves that theory out by hiring Oscar Isaac – a really good actor – to do something any b-list actor could have done for half the money and it would have had no discernible effect on the quality of this film. In all fairness, Apocalypse was always going to be a hard character to pull off – he’s epic in the comics – but let’s be honest: the pre-release photos of the character doomed it before it launched. When this meme started circulating… 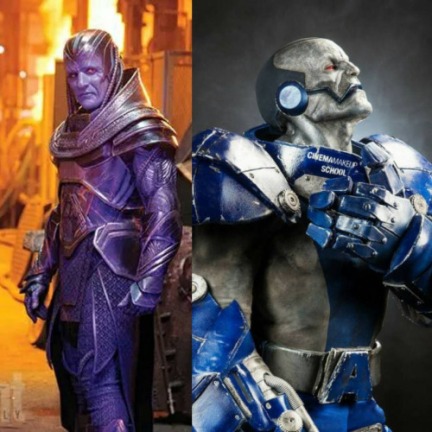 …this film was toast. When a convention fanboy makes a more menacing, more source-relatable, more powerful looking character than your $178 million movie, you HIRE THAT FANBOY. They should have at least stole whatever technology made all of the white gods in Gods of Egypt nine feet tall to make him, you know, imposing.  Also, I don’t buy that he convinced characters that are, were or will be X-Men to follow him on a path of world destruction. His recruitment speech basically consisted of giving them hot new costumes and amping up their powers. “Sure, you can kill billions of people…so long as I get to keep these new metal wings, bro. And can I get my Mohawk edged up like Storm? Sweet! MURDER.”

Perhaps the most fun part of Avengers 3 – I mean, Captain America: Civil War – was them introducing Spider-Man without an origin story. I mean, that was downright refreshing. The filmmakers knew that there wasn’t a person in the audience that didn’t know who one of the most famous superheroes in the world was after being on their pajamas and lunchboxes for the last fifty-four years. They trusted us to, you know, get it. But sixteen years after Singer launched this franchise, we’re still getting the same speeches. Give us some credit and spend those pages on, I don’t know, expanding on what the speeches are about. Show don’t tell, X-Men Apocalypse.

Closer, but still not there, mostly because she’s still weak and underutilized. Hasn’t she earned it yet, Singer? You been sidelining her for sixteen years.

Of all the things in X-Men canon, this is the one you want to insert into the film? No one cares who his father is, and that it’s Magneto just means we’re going to have to keep revisiting a character we’re already tired of. You have Magneto in one film too many (at least) already. Quicksilver isn’t any more potent because of this development. You got lightning in a bottle with him (as well as lucky, and you know it Fox) and you’re going to spoil it by having him use the X-Men as therapy. Yawn.

This is always present in major films like this, but here it was obvious to the point of distraction.

For those who aren’t buffed out on movie geek stats, this isn’t a Marvel-made film. This is a 20th Century Fox film of a Marvel property, much like all of the other Marvel-properties-that-aren’t-Marvel-films you also dislike: the last Fantastic Four, Spider-Man (a couple at best decent but all severely flawed), and so on. Don’t get me wrong: Marvel Studios has made some bad movies, but almost all of the good movies are theirs. MAYBE three films outside of Marvel’s creative jurisdiction can stand up to a proper MCU flick. And this isn’t one of them.

Now, WHY this is true depends on who you ask. Since you’re reading this, my answer is that Marvel is invested in these properties in a way no external company can be. This is owed mostly to the fact that they control the idea source – the comics – and have been able to vet thousands of angles over many decades. They know the rhythms, the best Easter eggs, the costumes we hate. Other companies tend to play things close to their Hollywood vests, and their movies look like it. That’s how you end up with, say, a Mystique that’s way too important (and frequent) to the storyline at this stage of the game. Those are Hollywood decisions, based on shopping mall tests and Jennifer Lawrence’s Oscar heft, which means exactly zero to a superhero film audience. The only reason a non-Marvel movie like Deadpool upends this equation is because it was so cheap to make that no one at the studio really cared what they did and they assumed people wouldn’t take their kids to see an R-rated superhero film. HA. ‘MERICA SUCKERS.

That after all this time this movie still feels like the set-up for some other movie they want to do is both palpable and disgusting. Just tell the story you have and quit trying to prep me for a film you haven’t made and that I’m almost positive I won’t like. You already reset the clock here two films ago. Why does this film feel like more foreplay? I now know what women must feel like when they have to tap their lovers on the head to tell them that’s not their spot. Tell the story in front of you better and let the sequels take care of themselves.

I’m hoping this movie does just poorly enough that Fox hands over the ball to Marvel and we get on to the phase twelve of whatever Marvel could be doing better with the universe they’ve already built. It’s time to put the X-Men in the Marvel Cinematic Universe sandbox and get some earnest and fresh movies out of this necessary property.

3 thoughts on “Dear Fox: Hand over the X-Men franchise slowly”